Language
The Best Award – The Top Inbound Tour Operator in Vietnam
organized the biggest number of visitors from Southeast Asia in 2018
Destinations  Vietnam  Da Nang
Da Nang is a coastal city with a 60-km long shoreline. With smooth and sandy beaches running across the coast, Da Nang beach is voted by Forbes (US) to be 1 of 6 most beautiful beaches in the world. Emerge yourself in the sapphire water, play with the waves or just sunbathe on the fine beach and you will get to relax and unwind after a hard working day. What's more, a selction of beach games are available on your demand: canoing, parasailing, jet-skiing, banana boát, sucba-diving,... Besides, Da Nang also known for many famous attractions such as Bana Hills, Son Tra Peninsula, Marbe Mountain, Dragon Bridge and Love Bridge,...
View more tours

1. Where to go shopping in Danang ?

3. Top dishes you should try in Da Nang?

Bun Thit Nuong (Vermicelli Noodles WIth Grilled Pork)
Bun Thit Nuong companies thin vermicelli rice noodles, freshly chopped lettuce, sliced cucumber, beans sprouts, pickled daikon, basil, chopped peanuts and mint, topped with grilled pork shoulder. Diners can also opt for bun Thit Nuong Cha Gio, which comes with crunchy slices of Cha Gio (deep-fried eggrolls). As with most Vietnamese dishes, you can get a side of dipping sauce to mix into the Bun Thit Nuong for a flavorful ensemble.
Banh Beo (Steamed rice cakes)
A specialty from Central Vietnam is topped with mung bean paste, toasted shrimp, fried shallots and scallion oil. Throw a little chill fish sauce and there for an extra zesty kick.
Mi Quang Ba Mua (Madam Mua Quang Noodles)
Mi Quang is the signature dish of Da Nang featuring chewy rice noodles that are tined yellow using tumeric and a shallow pool of bone broth, topped with river shrimp, boiled quail eggs and roast pork. In many eateries, you can also opt for other choices such as beef, chicken, snakehead fish, or eel. The dish is then topped with an array of fresh herbs such as basil, lettuce and coriander, along with peanuts and sliced banana blossoms. Lastly, green chili peppers, lime and seasame rice crackers are added to give a special kick to the flavor.
Banh Trang Cuon Thit Heo (Pork Roll)
A typical portion of Banh Trang Cuon includes a plate filled with pork, a bowl of rice noodles, sheets of rice paper, along with fresh herbs and vegetables. ​The meat is selected carefully and boiled to perfection so that you can savor the sweetness and tenderness in each bite. A large tray of vegetables is offered with lettuce, basil, bean sprouts, banana blossoms, onions, perilla, cabbage, cucumber and more. The dipping sauce is rich in flavor, giving you a taste of the sea, and the hot spicy chili peppers.

My Khe Beach
My Khe Beach boasts a 20-mile stretch of white sand that’s approximately 6 km east of Da Nang. Named by the American troops who visited during the Vietnam War, it is considered to be one of Vietnam's most picturesque beaches.
Non Nuoc Beach
Non Nuoc Beach is widely regarded as one of the most beautiful beaches in the world. Featuring soft sands, a gentle slope, clean waters and mild waves, there are plenty of things to see and do here. Popuar activities include sunbathing, jet-skiing, surfing and enjoying local seafood dishes.
Bac My An Beach
Bac My An Beach is known for housing some Da Nang's five-star beach resorts and hotels. It spans 4km in length and can accomodate over 5,000 beachgoers at a time. The resorts have their own private space for guests to sunbathe and enjoy outdoor activities.
Lang Co Beach
Lang Co Beach spans 110km in length, starting between Truong Son Mountain and the southern end of Hai Van Pass. It's one of the most hidden beaches in Da Nang as it's mostly visited by locals and travelers attempting Hai Van Pass's winding routes. Here, you can enjoy a day of relaxation with breathtaking view of mountain ranges.
Son Tra Peninsula
Son Tra Peninsula is where you can find some of Da Nang's most hidden beaches, such as Bai Bac, Tien Sa and Con beach. Located on Son Tra (Monkey) Mountain, the stunning pagoda is known for its 67 meter-tall white statue of the Goddess of Mercy.

Marble Mountains
The Marble Mountains are a cluster of five limestone and marble hills, about 9km south of Da Nang. Named after natura elements, the peaks are individually known as Thuy Son (water), Moc Son (wood), Hoa Son (fire), Kim Son (metal) and Tho Son (earth). Therea are also a host of 17th-century Buddhist sanctuaries and pagoda temples dotted throughout the mountains. To adimire the beauty of Marble Mountain, you should try a helicopter ride which lasts about 40 minutes from Da Nang International Airport to Phu Bai Airport.
Dragon Bridge
The Dragon Bridge measures 666m in length, making it the longest bridge in Vietnam. A popular spot with photographers, the six-lane bridge crosses the Han River and is constructed in the shape of a golden dragon, which locals believe is symbolizes power, nobility and good fortune. While it's a magnificent sight at any time of the day, Dragon Bridge is particularly captivating during weekends as it is illuminated with colorful LED lights while it breathes fire and spits out water from 9 pm onwards.
My Khe Beach
My Khe Beach boasts a 20-mile stretch of white sand that's approximately 6km east of Da Nang. Named by the American troops who visited during the American, it is considered to be one of the Vietnam's most picturesque beaches.
Hai Van Pass
Hai Van Pass stands at 500m above sea level. making it the highest pass in Vietnam. It's located on the border between Thua Thien Hue province and Da Nang city and has a panoramic views of verdant mountains as well as Da Nang City. Tien Sa Port, Son Tra Peninsula and South China Sea. The pass also hosts a dilapidated French-built fort that was later used as a bunker by South Vietnamese and US armies during the American War. Thanks to spectacular beauty and panoranic view, Hai Van Pass should be added to the itinerary of your vacation to Da Nang, Hue and Hoi An.
Da Nang Golden Hand Bridge
Golden Bridge in Vietnam, an incredible structure to enhance the face of Vietnam tourism in the global platform, was opened in June 2018 at Bana Hills Resort on Truong Son Mountains. Streching across the mountain, the two ends of this bridge are touching Marseille Station and the Tiantai Gardens at Le Jardin d’Amour. The well-known fairy tale themed French colonial village, Bana Hills now appears to be more reputational and magical, and thanks to this amazing bridge.
Cham Sculpture Museum
The Cham Museum commemorates the culture, lifestyle and practices of Vietnam's indigenous Cham tribe, who have roots dating back as far as 192 AD. Founded during the colonial French rule in 1915, it is the only museum of its kind in the world. The museum is divided into ten exhibition rooms, where 300 teracotta and stone sculptures from the 7th to the 15th centuries are showcased according to the region in which they were found.

Ms. Helen
I’m proud to represent GrandViet Tour and to help you find your perfect vacation. Before you book elsewhere, check with me please! You will receive added benefit of booking with GrandViet Tour as well.
(+84) 904 33 2078 (Viber/Line)
We offer all package tours to Vietnam and Southeast Asia
sales@grandviettour.com 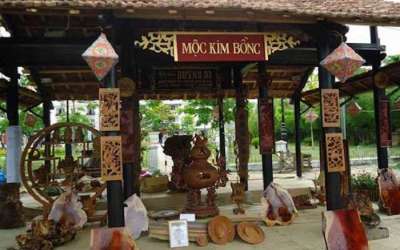 Hoi An is an ancient town located in the downstream of Thu Bon River, Quang Nam province, Central Vietnam. This is one of the most ​famous tourist destinations in the Central Vietnam that attracts not only domestic tourists but also tourists all over the continents. In 1999, Hoi An was even recognized by ...
View details 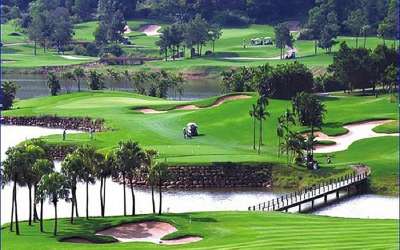 Perching 1,500m above sea level on the Lang Biang plateau, Da Lat is the capital city of Lam Dong province and the famous mountain resort town in Vietnam’s central highlands. Surrounded by mountain peaks, waterfalls, flower conservatories, and coffee farms, the air is fresh and the weather is cool, Da Lat has ...
View details

Da Nang is a coastal city with a 60-km long shoreline. With smooth and sandy beaches running across the coast, Da Nang beach is voted by Forbes (US) to be 1 of 6 most beautiful beaches in the world. Emerge yourself in the sapphire water, play with the waves or just ...
View details 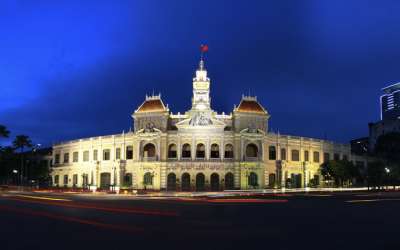 Ho Chi Minh City (Sai Gon) is the largest economic, political and cultural center in southern Vietnam. Sai Gon - Ho Chi Minh City is also a major tourist center with historical sites and museums that record wartime against the French and the Americans. Typically is the system of 11 museums, ...
View details 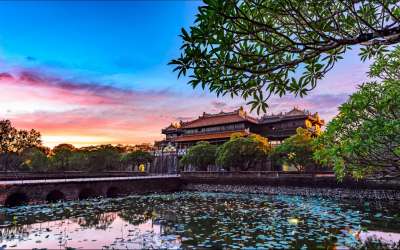 Located on the bank of Perfume River, Hue is the capital of Thua Thien Hue province in Central Vietnam. Today, this city is one of the three major tourist regions of the country, with a long history of cultural history. This is also a place to preserve and develop many famous ...
View details 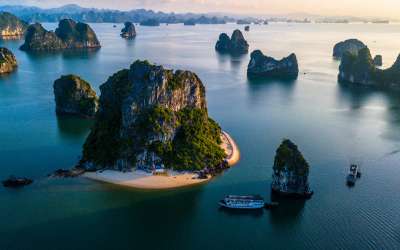 Ha Long Bay is located in the northeastern part of Vietnam and constitutes part of the western bank of Bac Bo Gulf, including the sea area of Ha Long City and Cam Pha Town and part of Van Don island district. Officially recognized as one of the New Seven Natural Wonders ...
View details 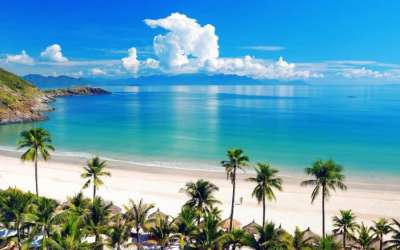 Nha Trang is a coastal city and capital of Khanh Hoa Province, located on the South Central Coast of Vietnam. It is bounded on the north by Ninh Hoa district, on the south by Cam Canh town and on the west by Dien Khanh District. This beach city is well known ...
View details 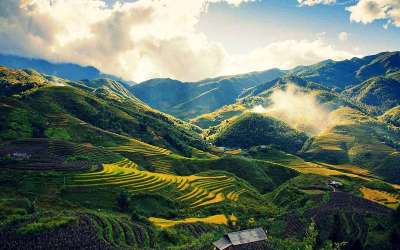 Sapa is a small mountain town in Lao Cai Province, located about 350 km northwest of Hanoi and close to the Chinese border. Come to Sapa, you will see the Hoang Lien Son range of mountains, which includes Fan Si Pan - the country's highest peak with  3,143 m high. This ...
View details 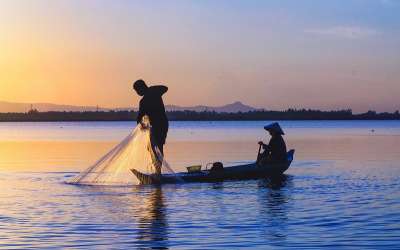 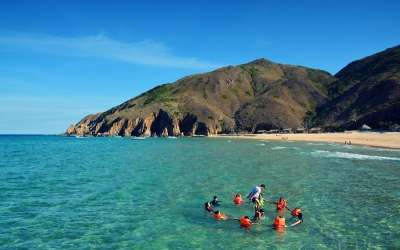 Quy Nhon is a coastal city in Binh Dinh province in Central Vietnam, well known for its beautiful surroundings Cham temples and long white-sand beach. This city has many ideal beaches such as Cat Tien, Nhon Hoi and Hai Giang where visitors can immerse themselves in the majestic natural scenery, the ...
View details 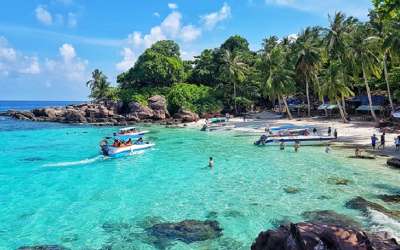 Phu Quoc, a tropical paradise located in the Gulf of Thailand, is the largest island of Vietnam located in the southwest, also the largest of the 22 different small and large islands here. This place has long been popular with tourists all over the country and internationally. This is not only ...
View details 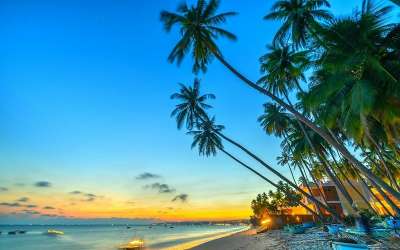 Phan Thiet is a tiny and pleasant town on the central Vietnam coast. Located midway between Saigon and Nha Trang on National Highway 1, for a long time, it has been famous for a reputation as a convenient overnight stop for travelers. Just 18km from Phan Thiet, Mui Ne has transformed ...
View details 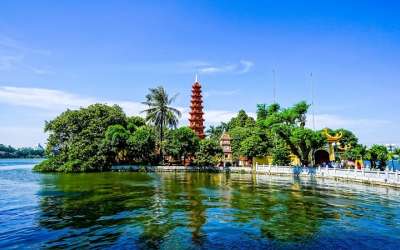 Hanoi, located on the banks of the Red River, is one of the most ancient capitals in the world, where travelers can find well-preserved colonial buildings, ancient pagodas, and unique museums within the city centre. Not only that, Ha Noi is also has preferential natural landscapes as well as the historical ...
View details
© GrandViet Tour., Co., Ltd. - The Top Inbound Tour Operator in Vietnam organized the biggest number of visitors from Southeast Asia in 2018.
© GrandViet Tour Co., Ltd. - International Tour Operator Licence 01-217/TCDL-GPLHQT.
Copyright © 2006 - 2020. All Rights Reserved.
[×]